Konosuke Matsushita was the youngest of eight children and was born on November 27, 1894, in a farming village called Wasamura.  His family was forced to leave their farm when Konosuke’s father lost his property.

Few months before he was to graduate from elementary school, and at only nine years of age, Konosuke had to say goodbye to his family on a journey to the city to work as an apprentice at a charcoal brazier store.

Konosuke would start his workday at the crack of dawn with the cleaning of the store. He was also tasked with caring for his employer’s children. The store went out of business less than a year after, and Konosuke found a new apprenticeship at a store selling bicycles.

Konosuke stayed on at the bicycle store for five years, on his father’s advice to forgo education saying “The skills you are learning will ensure your future. Succeed as an entrepreneur, and you can hire people who have an education.”

At this time, Konosuke was 15 years old and based on his instincts at the time that electricity would be the wave of the future, he applied for a job at the Osaka Electric Light Company.

Konosuke was quickly promoted to higher paying positions as his career continued to advance at the Osaka Electric Light Company. During his time at the Company, he came up with an improved electrical socket which he tried in vain to get his supervisor interested in.

Remembering his father’s advice about the advantages of being an entrepreneur, he left his job on June 15, 1917, to set up his own small manufacturing company. Due to meagre resources and low sales, the company barely escaped bankruptcy.

Shortly after the almost bankrupt episode, the business started picking up and Konosuke was able to invest money and rented a two-story home and launched Matsushita Electric Housewares Manufacturing Works now known as Panasonic.

Konosuke’s approach to business was very hands-on and innovative. He was a very bold and insightful man who was able to recognize and seize opportunities. He went on to produce products such as an innovative attachment plug and a two-way socket, both of which he designed himself.
These new products became very popular, and the company came to be known for high quality at low prices. And by 1922, Konosuke had to build a new factory and office to house his growing business.

Not slowing down, Konosuke again created a bullet-shaped bicycle lamp that would operate up to 40 hours without a battery change, as opposed to the other bicycle lamps on the market at the time, that were generally unreliable and usually died within three hours.

The wholesalers he approached were skeptical of his claims and refused to market his bicycle lamp. As usual, Konosuke not taking no for an answer decided to bypass the wholesalers and sent samples directly to bicycle shop owners, challenging them to test the performance of his lamp for themselves.

This bold move brought in a lot of orders, and the wholesalers who previously refused to work with Konosuke were now eager to distribute his product.

He went on to create more innovative products that were more reliable, more affordable and took his brand internationally and contributed to the economy.

In June 1956, Konosuke was granted the highest award in the Netherlands given to foreign nationals “for rendering a distinguished contribution and providing service for economic cooperation and for promoting friendship”. He was decorated by the Queen of the Netherlands at a ceremony held at the Dutch Embassy in Tokyo, as Commander in the Order of Orange-Nassau.

Konosuke Matsushita, the founder of Panasonic died on April 27, 1989, at age 94, after changing the world he lived in.

His full story can be read here

LESSONS FROM HIS LIFE

Anything is possible if you believe in yourself and believe in your dreams. It doesn’t matter where you started from, be bold and relentless in forging a new path. Keep learning and growing and never give up. 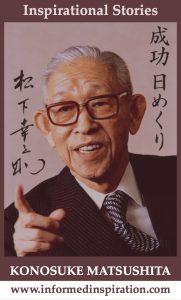