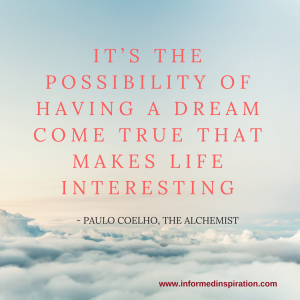 This quote is from the famous book The Alchemist by Paulo Coelho. It tells you why it is so important to follow your dreams and listen to your heart, just like the shepherd Santiago, the protagonist of Coelho’s book. Trust your instincts always, and never do anything that your heart or souls deem inappropriate. Follow your dreams, and the pathways of life will open before you.

Who is Paulo Coelho?

Coelho is easily one of the most famous authors in the world and a huge celebrity in his own right. He has sold more than 100 million books, which have been translated into many languages. He holds a record for the most sales by a translated book – the English version of the “The Alchemist”.

The Alchemist follows the story of a young Andalusian shepherd, Santiago. Santiago has this recurring dream where he sees himself acquiring an extraordinary treasure, the greatest treasure in the world. The dream is so vivid that Santiago truly believes that finding this treasure is the mission of his life.

He then sets off on an adventure where he travels great distances. He goes through Egypt, meets many unique people, some good, some bad, falls in love with a beautiful Arab woman, but does not stop anywhere, as he continues his journey in the search of this great treasure.  It is only towards the very end does Santiago realize the true meaning of his dream.

I am not giving any spoilers here; I want you to read the book to find out what Santiago learns at the end. But what I can tell you is that the Alchemist is one of those great books that truly makes you think about your life and what are you really doing with it.

What you learn from this quote is that it is the dream that makes life worth living. When you truly desire something or have this recurring dream about something beautiful like Santiago has, the whole universe conspires to help you realize your dream.

Yes, it is not easy to be a dreamer in this world. Your dreams get squashed by reality right from very early in life. Life has this capacity to squeeze out hope, or kill a dream, even for the best of us.

You are told from your childhood about what goals you should be pursuing. You know the routine – do well in school, get into a decent college, get a job, get married, have two kids, save money for the future, retire at 65 and before you realize what has really happened, you find yourself in an old age home.

Is that what life is about?

Would things turn any different had you followed your dream, instead of getting on with the routine as the society wants or expects you to? Maybe or maybe not.

Imagine – where would the late Steve Jobs be had he not followed the dream and choose to follow the routine like everyone else of his age in the 1970s? Well, he would probably complete his college education, get a job at IBM, got married in his late 20s, led a stable life, retired, and maybe he would be around even today, playing with his grandkids.

What about the PC revolution? That would have never happened. There would be no Apple Computer, IBM would still be the biggest company in the world, and I would be typing this on my trusted typewriter! Ha!

Yes, there wouldn’t be any iPhone either, no smartphone, so many great technologies that we take for granted today wouldn’t have existed had Steve Jobs chose to go by the routine, just as everyone wanted him to, rather than follow his crazy dream.

His insane dream of taking on a corporate behemoth like IBM; putting an Apple computer on everyone’s desk; coming up with a small device, the iPod, which could hold a thousand songs; launching a “smart” phone, one that was more like a mini-computer than just a mobile phone….

You see what I mean?

No, we can’t all be Steve Jobs even if we were to follow our dreams. But it is having a dream and doing something about it, that makes life fun, interesting and worth living.

A dream is about having a real passion for what you are trying to accomplish and going after it with every arsenal at your disposal, without worrying about the consequences.

Never sell yourself short, you have greatness in you. All of us are God’s creatures and have been put on this planet to do something special, to live our dreams, to inspire other people and to make the world a better place.

Your dream may come true, or it may not, you may achieve your goals, or you might not, but as young Santiago finds out in The Alchemist, the journey itself is the reward.

1 thought on “What Makes Life Interesting?”